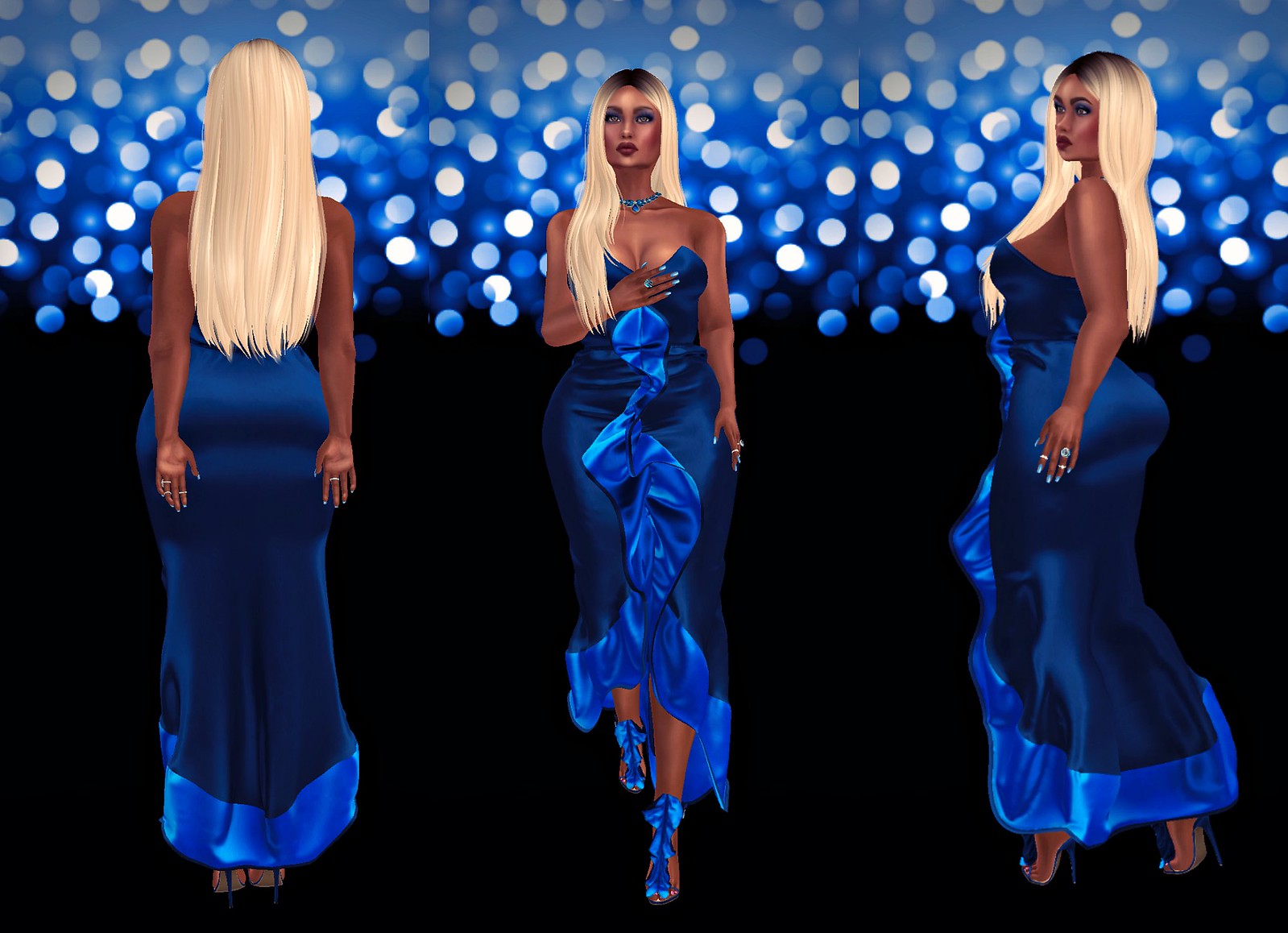 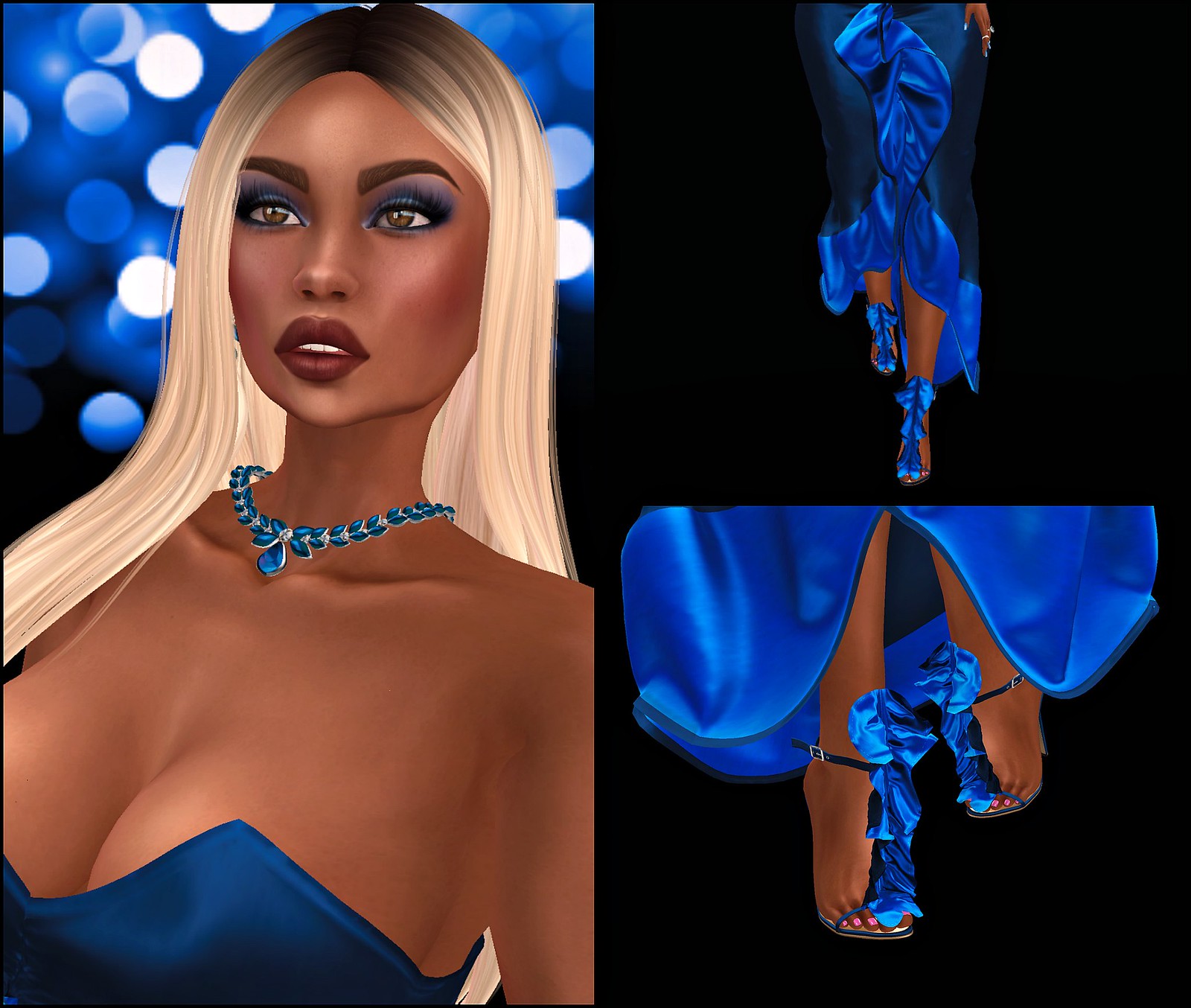 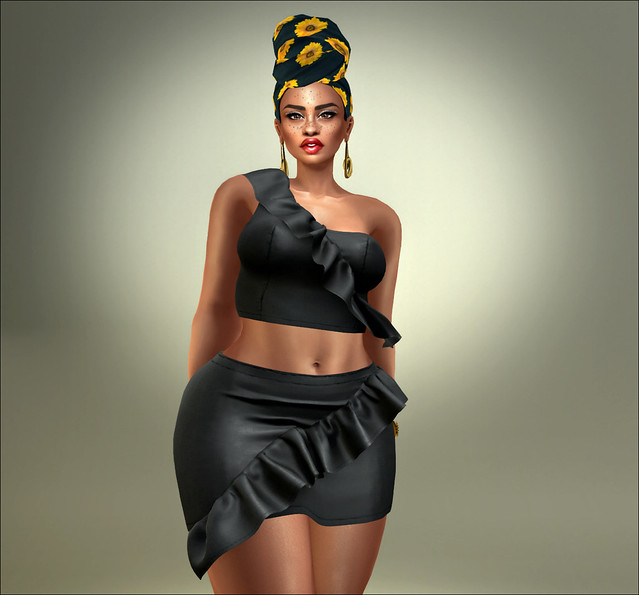 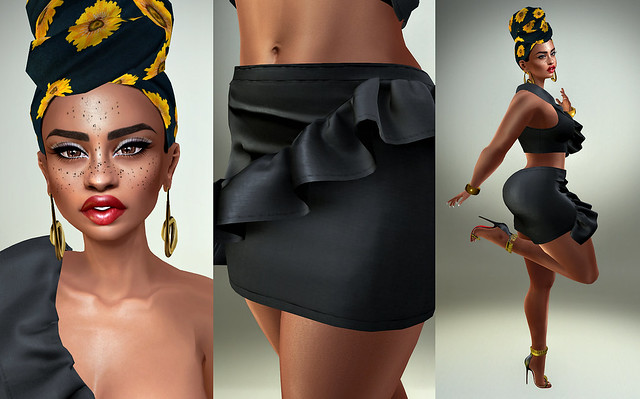 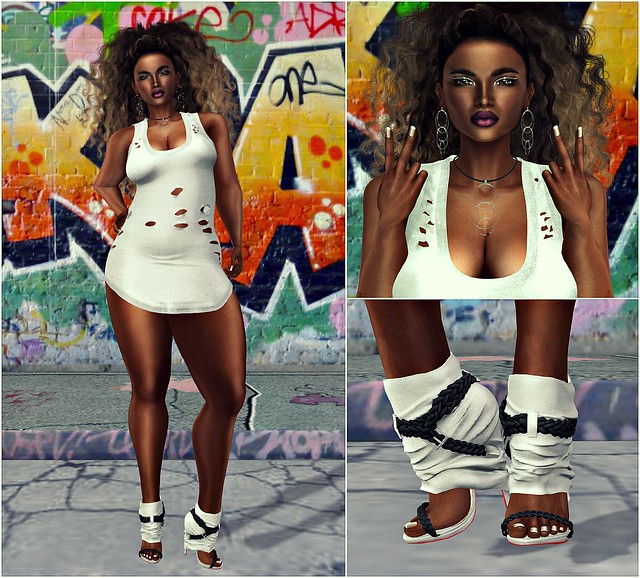 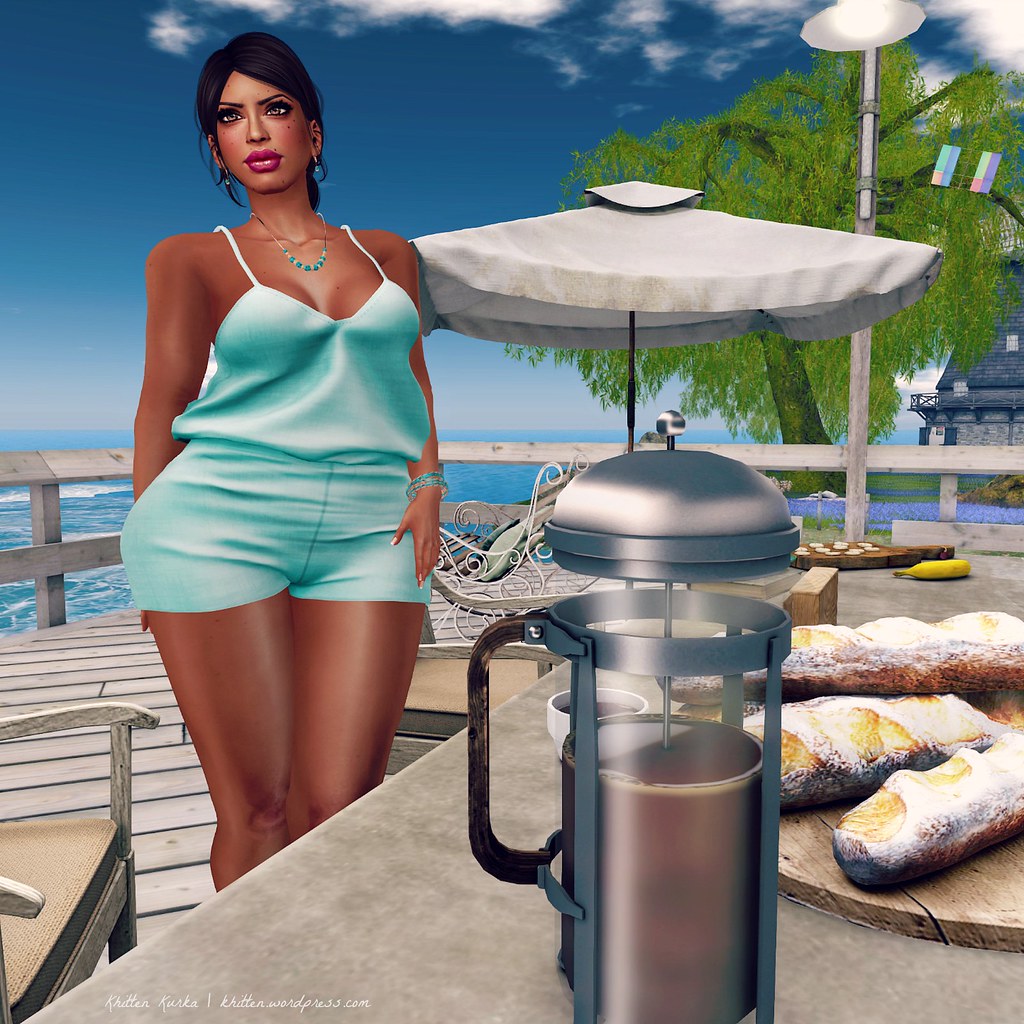 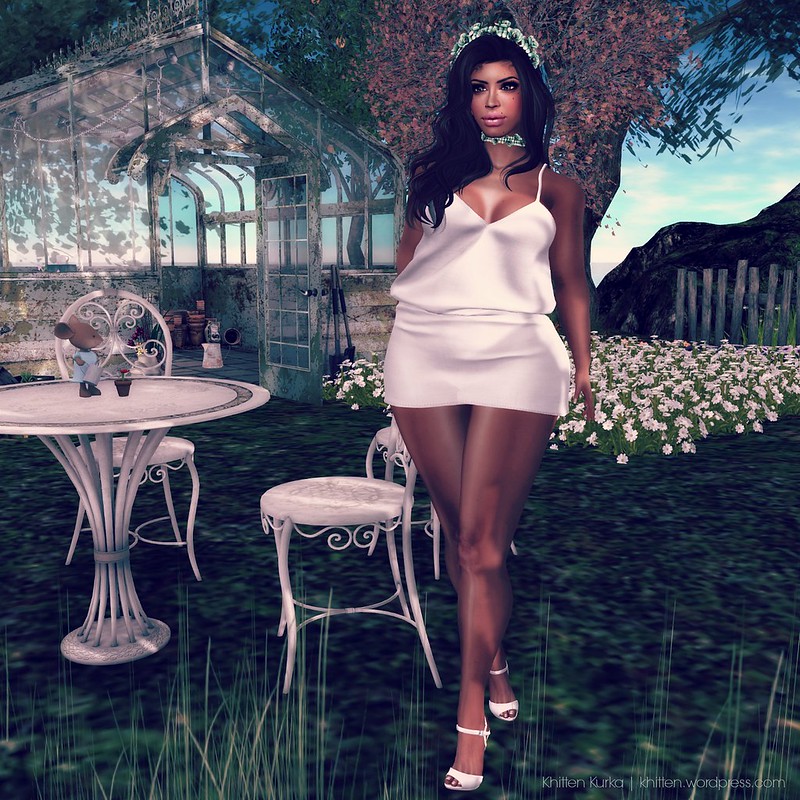 “But you couldn’t. You wouldn’t. Not after what we’ve just done.”
– Rosie Carver

“I certainly wouldn’t have killed you before.”
– James Bond

If you’re a James Bond fan, like I am, then this round of Collabor88 is right up your alley. With a focus on all things intrigue and mystery, the theme of “Espionage” took this month’s designers in many different directions.

Hucci helped inspire me to recreate the look of a famous, but not always remembered, Bond girl. In the 1973 Bond film, “Live and Let Die,” Rosie Carver was a fictional CIA (double) agent who also worked for Bond’s nemesis: Kanaga. Played by Gloria Hendry, Rosie Carver was Bond’s first on-screen, African-American love interest. 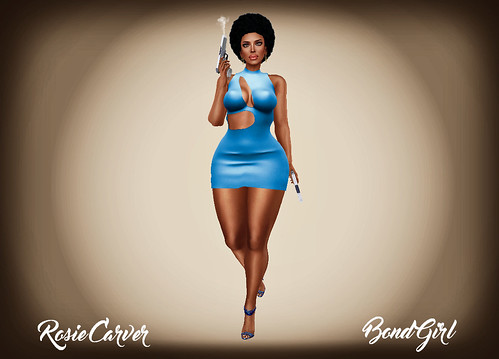 Interestingly, the character of Rosie Carver was initially written as a white woman. The main love interest of the film, Solitaire (played by Jane Seymour), was original written as a black women. I suppose, and this is just me guessing, the producers felt it was “safer” and more acceptable for the times to reverse the casting of those characters. Notwithstanding the legendary exploits of Ian Fleming’s James Bond, the current round of Collabor88 can help you create your own exploits of mayhem and espionage.

Hucci has released this killer of a dress, Sydney. It is fitted mesh for Slink and Maitreya and comes in 15 colors. Demos are available. 88L each or 788L for the collection.

Add on Hucci’s Bristow Sandal to make the outfit complete! The sandal is made to fit Slink and Maitreya– high feet only. Demos are available and the shoe comes in 15 colors. 88L each or 788L for the fatpack. 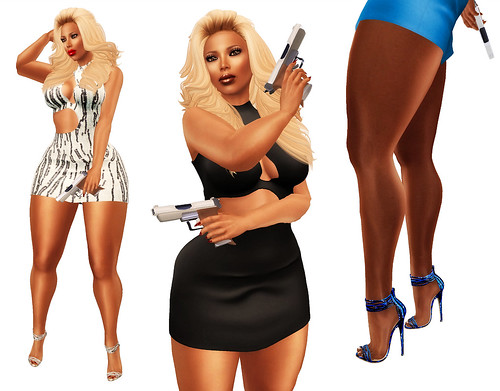 Tagging along with Hucci this month is Iconic. Nothing exudes mystery more than a hair style from Iconic. Check out the rigged, mesh hair, Kensiya. I am wearing colors from the Bombshells pack. Single color packs are 228L to 488L, with ombres and other special packs on the higher end. Want it all? Get the fatpack for 2188L.

For the current round of Collabor88, things are lighting up. With the theme of “holographic,” designers are selling their interpretations of illumination, iridescence and illusion. 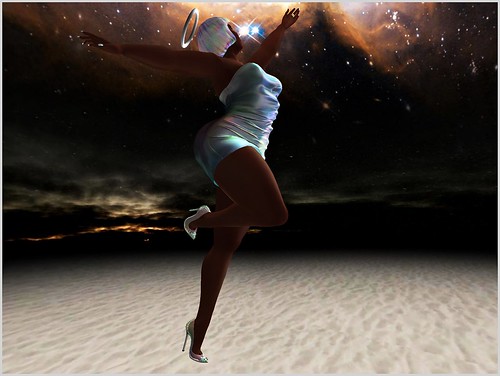 Hucci brings forth two stylish options that capture the theme’s essence. First up is the Killona Dress. The dress is fitted mesh for Slink, Maitreya and Belleza. Also includes rigged mesh standard sizes. Killona uses materials to create an iridescent look. To get the best effect, you must use a materials enabled viewer.

The Nakskov Pumps are made for Slink and Maitreya. This Pvc- designed shoe also has studs on the toe cap and heel. Comes in many colors options and have the same shine/iridescence as the dress. Be sure to demo and check them all out!

I was digging the Halo Glitter Bob Wig by Nylon Outfitters. It’s just so posh and fun at the same time; I just had to have it!

You can find these items from Hucci and Nylon Outfitters— all of them only 88L each– at Collabor88 through Feb. 6.

In a previous post, I shared a dress I found at The Dressing Room from The Xhale. At that event, The Xhale also offered this long fur vest and I couldn’t resist!

I paired the vest with a few released items from Hucci at the December round of C88. The Iba Sweater Dress, shown below in black, is fitted mesh for Slink Physique, Maitreya Lara, Belleza Freya and Isis as well as standard size. The dress comes in 10 colors.

Both items are 88L each and are still available at C88, which recycles on Jan. 6. Teleport now!! 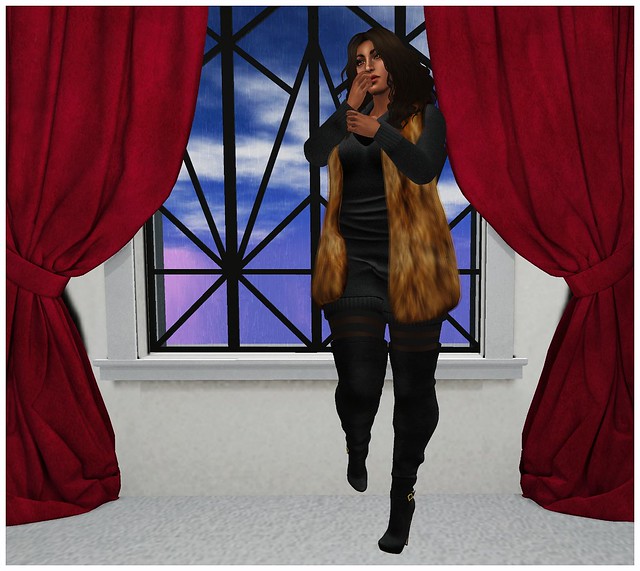 This wonderful prop, called Secret Window, is by Purple + Me. Available at C88, this prop comes in a singles version (shown) and a couples version. The single version has six built-in poses. A HUD controls colors and textures on walls, curtains and floor. Back wall and roof can be hidden. 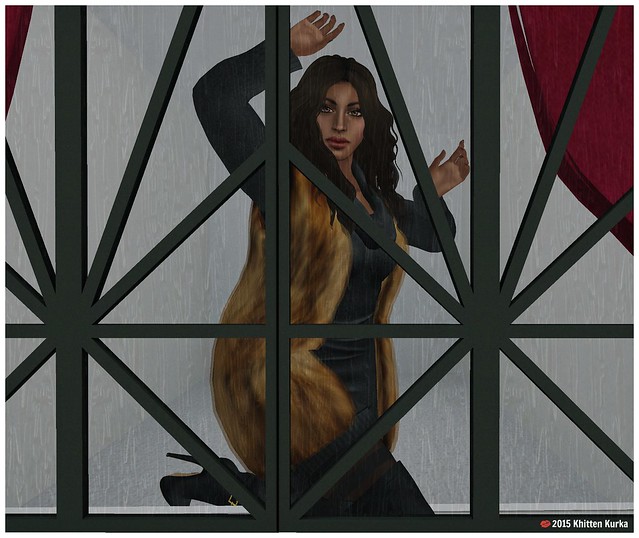 I love the effect of rain/showers on the window pane. Gives the prop a melancholy and dramatic feel. Or maybe it’s just me, lol!

I am totally loving the current round of Collabor88. This mysteriously sexy look is brought to you by Ison, Vanity Hair and Hucci. You can find these fashions for yourself at Collabor88, now through Nov. 6. 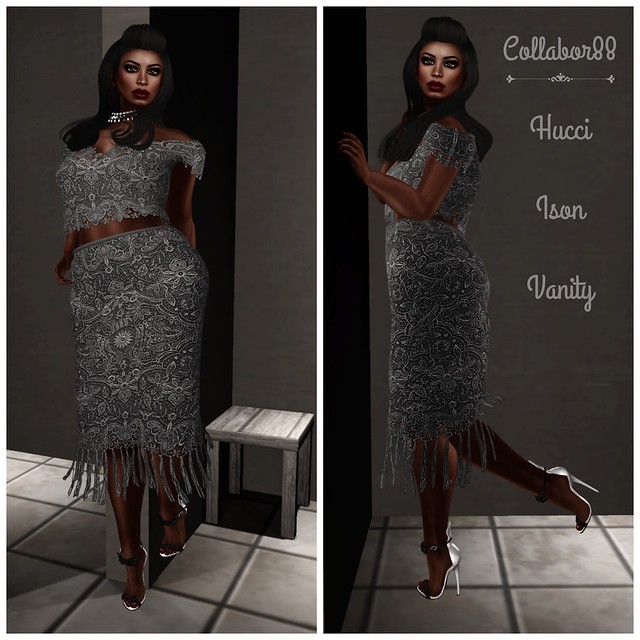 It’s time for another round of Collabor88. The September theme is muted coven and tbh, I am not sure what that means. But from the look of things, its dark, mysterious and somewhat alluring!

As always, you will find hot and new fashions available from Eboni Khan and her Hucci brand. All the items are true to form and fashion for the event, only 88L!

The Korce Satin Top and Lubec Skirt are mix and match pieces. Available in seven color variations, each is styled with netting overlay. Perhaps it’s a web of intrigue?

Korce and Lubec are rigged mesh for standard sizes and fitted mesh for Slink, Maitreya and Belleza. I’m wearing the skirt and top in the “Slink” fitted mesh and it’s a perfect fit!

Of course Eboni won’t leave you hanging in the shoe department. The Minerva, a witchy inspired sandal, is designed in soft suede for Slink, Maitreya and TMP. Seven variations (to match with the skirt and top). The shoe comes with a HUD that controls the sole options.

The flight of tomorrow

A blog about fashion and everything sexy in SL